Silver jewelry showing an icosahedron. An icosahedron is made up of equilateral triangles fused together in a spherical shape. The icosahedral structure is common among viruses.

Long time ago I solved the first capsid structure of a bacterial virus, MS2. MS2 is a small icosahedral virus.

To show an icosahedron I used to form it in paper now I have shaped it in thin silver plate.

Propofol as silver earrings are now in my webshop.

Propofol is a short-acting medication that results in a decreased level of consciousness. Its uses include the starting and maintenance of anesthesia. It’s also used to sedate a patient who is under critical care and needs ventilator. 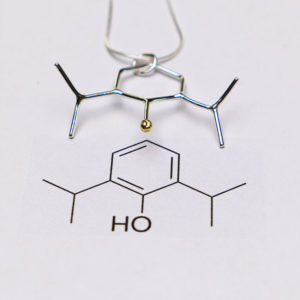 Handmade pendant of propofol in Sterling silver wire with the OH group as a 18K gold ball.

Dopamine is a neurotransmitter that the brain uses to send signals between the brain cells. In Parkinson’s disease, the cells that produce dopamine are destroyed. The lack of dopamine gives rise to impaired motor skills. James Parkinson was born in London, April 11, 1755.  He was, among other things, a surgeon and apothecary and he is primarily known for his work “An Essay on the Shaking Palsy” published in 1817. Parkinson was the first to systematically describe the symptoms of the disease that bears his name.

On April 11, the International Parkinson Day is highlighted around the world. A small portion, 10%, of the sales of my dopamine jewelry goes to the Parkinson’s Association Research Fund.

Favipiravir is an antiviral drug. Results from China have shown that favipiravir seemed to be effective in treating COVID-19 in Wuhan and Shenzhen.

Hydroxychloroquine (HCQ) is a medication used for treatment of certain types of malaria. Preliminary results have shown that HCQ also can be effective in treating COVID-19-associated pneumonia.

Pendant with hydroxychloroquine in silver wire with Cl-atom as a green enameled silver ball, N-atoms as oxidized silver balls and the  oxygen as a 18K gold ball.

I’m a silver artist and combine several years of experience as a researcher and protein crystallographer with my silversmith. Do you have a molecule, a protein that you would like to have as a silver jewelry? => email me at info@valegarddesign.se.

Valentine’s Day is February the 14th. Maybe a day when you want to show your love to someone you love. Why not give an unique silver jewelry?

Oxytocin – Love hormone, released when we hug and lower the stress level in the body.

Phenethylamine (PEA) – neurotransmitter giving us the feeling of being in love.

Silver heart – solid silver heart, cast in solder coal. It has a wonderful weight and an exciting finish.