Pendant of insulin in 1.2 mm silver wire. The protein wire is colored in the colors of the rainbow, from blue (first amino acid) to red (last amino acid).

Insulin is a hormone which lowers blood sugar levels. Sir Frederick Banting and John McLeod were awarded the Nobel Prize in Physiology or Medicine 1923 for the discovery of insulin. The Nobel Prize in Chemistry 1958 was awarded to Frederick Sanger for his work on the insulin structure, a discovery that was fundamental to the production of synthetic insulin. 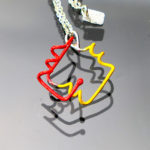