The Nobel Prize in Physiology or Medicine in 2022 was awarded to Svante Pääbo “for his discoveries concerning the genomes of extinct hominins and human evolution”.

Svante Pääbo mapped the genome of Neanderthals by sequencing mitochondrial DNA, mtDNA, from pieces of Neanderthal human bone. mtDNA is a small circular chromosome found inside the mitochondrion.

This year’s Nobel Prize jewelry in Physiology/Medicine is therefore a mtDNA necklace. mtDNA is usually illustrated as a thick ring of double-stranded DNA, right-handed around the ring. 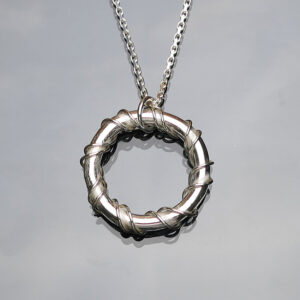 The Nobel Prize in Physics in 2022 was awarded Alain Aspect, John Clauser and Anton Zeilinger “for experiments with entangled photons, establishing the violation of Bell inequalities and pioneering quantum information science” .

This year’s Nobel Prize jewelry in Physics is ‘Two particles with entangled photons’ as a jacket pin/brooch. The two particles do not have a definite state before they are measured. Both particles are gray, with no secret information, until someone looks at one of them. Chance decides which one will be red/yellow and which one will be green/blue. One may turn out to be green/blue. Immediately the other particle then gets the opposite color. 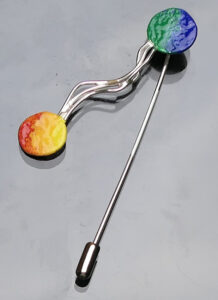 The Nobel Prize in Chemistry in 2022 was awarded to Carolyn R. Bertozzi, Morten Meldal and K. Barry Sharpless “for the development of click chemistry and bioorthogonal chemistry”.

Click chemistry is a new and systematic way of building molecules by snap together molecular building blocks.

This year’s Nobel Prize jewelry in Chemistry is the Triazol necklace, the crown jewel of click chemistry. The result of the copper catalysed azide-alkyne cycloaddition. 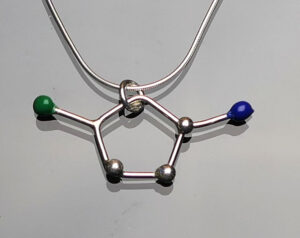