Every month I will show a protein structure in thin silver wire. The first protein in January was the coat protein of the bacterial virus MS2. Since then it has been myoglobin, potassium channel, calcitonin, birch pollen, insulin and glucagon. The protein for August is the human growth hormone.

I’m so pleased and proud to announce my new website. Thanks Andreas for your nice work! The focus is on my handmade silver proteins. A perfect piece of silver jewelry for you who are looking for a different gift.

In September, I will show my silver proteins in the Akademiska sjukhusets Art Association’s glass cabinet at the entrance 70.

In April I showed 16 of my silver proteins, as well as some of my ‘normal’ silver jewelry in the Medical Products Agency in Uppsala. 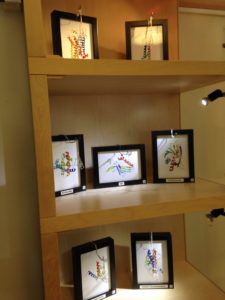 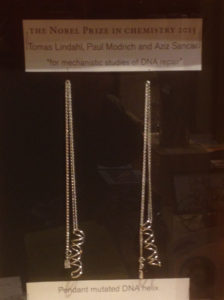 Following a request from the Nobel Museum I designed my variant of the DNA helix. A simple form that displays the major and minor groove. I made both necklace and earrings and they were ready in time for Nobel prize ceremony, December 10.  One DNA pendant ‘starred‘ in the Nobel studio on Swedish television, SVT. 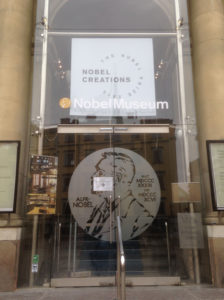 My first order from the Nobel Museum shop came in September 2014. It was silver jewelry of myoglobin, insulin, adrenaline receptor and glucagon.

Began to sell my silver proteins myoglobin, myohemeytrin, insulin, glucagon and the coat protein of MS2 in the shop at Museum Gustavianum.